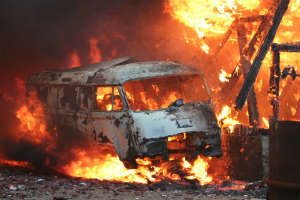 HIGHLAND, CA – A young man lost his life in an incredible act of bravery and selflessness a few days ago in Highland, California. Albert Madrid, who returned to his trailer park along with his girlfriend, just after midnight on March 10, spotted the mobile home fire. In a quick decision, Madrid ran to the burning home to help the family inside.

The fire began sometime in the middle of the night on March 9, when the family inside was asleep. Firefighters arrived on the scene soon after Madrid went inside the building, but by then the flames were even more large and dangerous. Madrid retrieved the family from the fire and got them to safety.

Unfortunately, Madrid did not make it out alive. While he succeeded in rescuing the entire family from the flames, in the end, he got stuck in the dangerous blaze. Friends and family of Madrid are devastated at the result of this incident. However, they are comforted by and proud of the fact that he died a hero.

Madrid’s mother met the family that he saved and shared an emotional moment with them. They thanked her for her son’s brave actions in the fire that could have killed multiple members of their family. In addition, Madrid’s father wrote a eulogy for his son online, calling him “the bravest man” he ever knew.

After holding a vigil for him, the family is now arranging a funeral service for Madrid. Through the ceremony, they hope he will be remembered for the heroic actions that took his life.

Currently, fire officials are still investigating the cause of the fire, which remains unclear.

States Where Hours and Lights Violations’ Intensity Overlap with Inspection