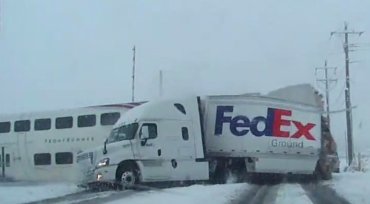 A Utah Transit Authority Front Runner passenger train slammed into a FedEx Semi. The tractor trailer was split in two leaving packages spread out across the road. The blame was put on railroad crossing signals which were deemed as malfunctioning.

The Utah Transit Authority stated that the gates were up and the bells and lights were not working while the truck was crossing the railroad tracks.

Weather conditions were stated to be the cause for the crash. The snow and ice affected the functioning of the gates.

The moments after the crash, the drivers were assessed for injuries first and later crews arrived to assist the passengers of the train.

Thankfully, no serious injuries were reported.

This is a great reminder that taking precaution while crossing rail road tracks. Accidents that involve trains take place every two weeks on average. In 2015, there were over 2,000 accidents reported which involved trains, in those 2,000 there was 200 fatalities reported. Even though they are a common occurrence, we only hear about these train incidents when something is caught on camera.
The crash still remains under investigation.

States Where Hours and Lights Violations’ Intensity Overlap with Inspection

At Home Coronavirus Tests Not Approved

Truck Stops Closed due to Power Outages From Winter Storm