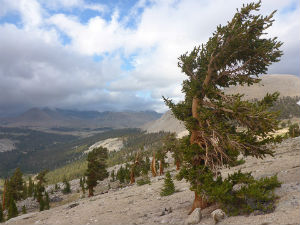 LOS ANGELES, Ca – High winds toppled down trees and caused power outages across Southern California yesterday. Officials reported winds up to 50-60 mph in the mountains and 25-45 mph in the LA Area.

Power outages were reported in Hollywood Hills, Silver Lake, Los Feliz, Mid-Wilshire, Koreatown, and Fairfax district areas, among others. The Department of Water and Power sent out crews to repair and restore service. The wind storm left about 50,000 customers without power. In addition to the outages, a tree fell onto Crenshaw Boulevard exit of the 10, causing major delays.

Additionally, trees fell on cars, including patrol vehicles. However, no injuries were reported. In fact, winds were so extreme that the LAPD was forced to ground their fleet of helicopters, according to officials.

In Baldwin Park, a huge tree crashed on top of a home. The owners were home at the time but did not have any injuries. Mayor Manuel Lozano stopped by the Baldwin park home to inspect damage. Residents claimed the tree that fell onto the home had been leaning for a long time and was previously reported as a hazard. The mayor said he would look into the matter.

In Westwood, a large tree crashed into an apartment building that is under renovation.

LADWP urges customers to use caution around downed power lines and poles, and to call 911 if you see a downed wire.

Meteorologists expect the northerly winds that blew into the region Tuesday morning to calm down by Wednesday afternoon.