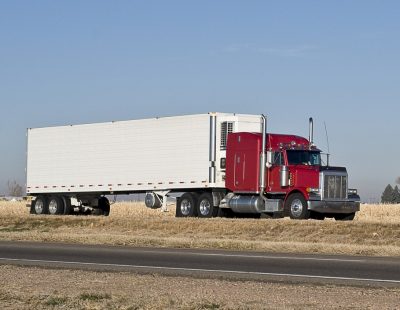 Under-ride guards at the backs of semi-truck trailers have been on going tests for quite a while now, the purpose of these tests was to find out which ones are more beneficial when it comes to preventing gruesome accidents that occur commonly on our roads. The organization behind these tests is the Insurance Institute for Highway Safety. The IIHS has now shifted its focus to another part on the semi-truck, which is the side. The purpose of testing this impact point on the semi-truck is to prevent smaller vehicles from going under the semi-truck during accidents. After completing its initial test run, the Insurance Institute for Highway Safety has announced good news and bad news.

So, what’s the good news? The Airflow Deflector Inc. AngelWing the IIHS tested was a good option. It successfully halted a car that was traveling 35-miles per hour from crashing under the trailer. This is depicted in the video below. Overall, the crash looks like a normal crash test. All the safety devices in the car did their job and protected the dummy driver.

The bad news is that the air deflectors on the semi-truck are designed for the sole purpose of improving aerodynamics and because of this they offer no protection during impacts. Also, tested under the same conditions of the purpose-built guards, were fiberglass versions of the same air deflectors. These tests concluded that at the point of impact the deflector folded up against the underside of the trailer. This resulted in the vehicle going under and the edge of the trailer crashing in the windshield of the vehicle, which eventually reached the head of the dummy inside. In conclusion, the crash was most likely to be fatal.

The IIHS is enthusiastic regarding this topic. 301 people lost their lives because of a crash of this sort in 2015. These side guards can actually save lives by preventing fatal accidents. The recommendation made by the organization was that the side guards should be a requirement nationwide as a fatal accident prevention motion.

This video is for viewing purposes only. We do not own any of the rights to this video.