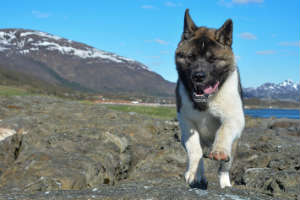 PARADISE, CA – A dog and family just reunited this week after being separated in the disastrous Northern California wildfire last year. The Ballejos family dog, Kingston, jumped out of their truck when they fled from the fire.

Many family members, animals, and loved ones were not lucky enough to find each other. The fire killed eight-five people in the town of Paradise. Additionally, the fire destroyed almost fifteen thousand homes in the area. Luckily for this family, finally, after over one hundred days, the family and dog have reunited.

The Ballejos family is amazed, relieved, and proud of their dog for surviving this long on his own. However, they never gave up on him during that time. Throughout the time he was missing, they continued to post flyers of the lost dog, with his picture. In addition, they contacted multiple shelters to see if anyone had found him.

Finally, an animal rescue volunteer named Ben Lepe, called the family. He was able to catch Kingston on Sunday. Then, he took the dog to Friends of Camp Fire Cats, which is a local rescue group. When the volunteers saw a message there about a missing dog, they contacted the Ballejos family.

Apparently, Lepe stated that shelter workers spotted Kingston on the surveillance cameras. That was how he knew to set a trap big enough for the Akita, who weighs at least seventy-five pounds. He set the trap on Saturday and went back to check on it the next day. He was relieved when he found Kingston in the trap, knowing that he would soon be warm and fed again.

The Ballejos family believes that Kingston survived by eating skunks. Before the fire, he hunted skunks and they claim that he smelled of skunk when they picked him up from the shelter. The Friends of Camp Fire Cats shelter has rescued over two hundred lost pets so far.

Taxis Start Their Engines For Prop 22