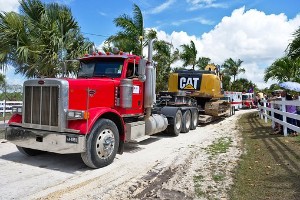 There’s an argument circulating that the highways are overstuffed with tractor-trailers. Even worse, people who hold this opinion also maintain that the trucks on the road are only increasing in size.

Now congressman Matt Cartwright says the mixture of both these facts is producing even more serious injuries when it comes to truck accidents. Consequently, he’s urging for a big jump in the amount of insurance liability that truckers must possess.

On the other end of the argument, truckers say that increased insurance expenses mean consumers will pay more for almost everything they purchase. Plus, there’s a Republican group that suggests that Matt Cartwright’s motives are suspect to begin with. They claim his connection to personal injury law constitute a legitimate conflict of interest.

Cartwright’s thinking is that this increase will in a way bring delayed justice for all the truck crash victims.

Trucker Charles Keys said, “It seems like they’re trying to put us out of business.” He maintains that higher insurance premiums is definitely not what the public or truckers need.

He said, “Nobody wins. They’re taking out of our pocket and then the cost is passed on to the retailers as well as the consumers.”

The big fear from the trucking community is that they’ll pay even more for insurance if the government does sign off on a plan to raise minimum liability coverage for each truck from $750,000 all the way up to $4.5 million.

Who Stands to Benefit

One trucking company president argued that the real beneficiary of this bump would be lawyers. In his eyes, the legislation would compel more lawsuits and lead to attorneys asking for bigger judgment amounts for their clients.

No matter what, the bottom line truth is that if this increase happens it will negatively impact an industry that’s been teetering on the brink all year long.

What do you all think?

3 Tips to Improve Your Trucking Career